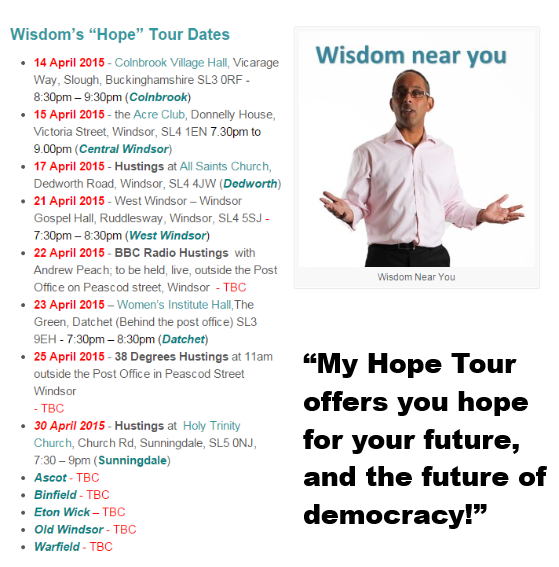 Go find out on “Wisdom’s Hope Tour”… he want to listen to you, so will come to you and arrange public meetings in a hall near you. You will also get a chance to ask him questions. His Hope Tour offers you hope for your future, and the future of democracy.

If there isn’t a hall near you, you arrange the meeting with your friends and family, and he will come to you.

Wisdom is an Independent Councillor at the Royal Borough of Windsor and Maidenhead. He is also the immediate past Chairman of the largest local residents association in Windsor with around 1,100 member households. The West Windsor Residents Association (WWRA).

Wisdom currently runs a tax and accountancy practice in Windsor, and has also launched a pioneering tax education/refund app for employees called Quickclaim.

Wisdom is a qualified accountant (FCCA), corporate treasurer (AMCT), and a teacher (QTS), and has worked at a senior level for a European multinational. He is married to Carole, and has 5 children, 1 grandson, and 3 dogs. Wisdom and Carole live in Windsor.

Go see him on tour… or visit his website… or both!

One thought on “Who is Wisdom Da Costa, Windsor’s Independent Candidate for Parliament?”