Last night’s Infrastructure Overview & Scrutiny Panel meeting to discuss the Work Programme didn’t quite roll out as planned… no surprise there! I had brought good reasons to encourage agreement in a Task & Finishing Group but Conservative Councillors had already decided I wasn’t going to get an opportunity to say anything and did what they do best, disrupt and close down any discussion… make your own mind up by watching proceedings…

How will 5G, AI, ML, IoT and Big Data be used for the benefit of residents & businesses in RBWM?

Many businesses are getting excited by the potential of new technologies and digital innovations. How are we going to evolve the infrastructure to help local businesses make the most of the future potential while addressing the natural concerns many residents have? The concerns are around the potential health risks these new 5G frequencies in the electromagnetic spectrum may bring and in relation to how personal data, shared to facilitate AI, may be used.

Last week I emailed panel members with the opportunity to read more about Glastonbury’s decision to adopt the Precautionary Principal.

This Infrastructure O&S meeting is about agreeing the work programme so my focus will simply be on explaining why I think this topic needs wider debate, how I suggest the T&F should be brought together and I hope panel members, conscious of the feelings & needs of residents, agree to its inclusion in the work programme.

Key points as I see them in relation to this…

A1 – O&S can create sub panels on items and decide on methodology
A7.6 – We can raise concerns about services that impact residents ie bin contracts
A9.3 – Any item brought forward for debate needs reasons why… this presentation
A10c – We can bring together experts to advise us. (From around the world now we have Zoom)
A17 – With regards to voting on decisions. If anyone has been whipped they should tell us before discussion around item. (I have been assured by senior cabinet members that this never happens and they are happy to contribute to the debate should the panel decide to move forward.)
B2 – Consider matters affecting residents and review and scrutinise relevant bodies and invite reports from them. (Ask local telcos what they are up to with 5G)
B7.3 Overview and Scrutiny Panel Members will:
22. Actively engage with the community to obtain views and encourage attendance at meetings
23. Ensure that the scrutiny process contributes to the promotion of community well-being and that public services are responsive to the needs of the people.

Over the last year I have seen and contributed to regular posts on FB from residents concerned about 5G telephone masts and their potential impact on health and wider concerns around data gathering.

The National Planning Policy Framework states
‘Health considerations and public concern can in principle be material considerations in determining applications for planning permission and prior approval.It is for the decision-maker (usually the local planning authority) to determine what weight to attach to such considerations in any particular case.’ (Para 29 of Appendix)

So it falls to the RBWM… although, when I asked, the default position appears to be to stand back and let the telcos do as they please with minimal paper work.

US Senator Blumenthal asked CEOs of telcos in America how much money was being spent on research into impacts on human health and was told ZERO!

Senator Blumenthal sharing some of his concerns…

Brussels, Ireland, Wales, Slovenia, Russia, Netherlands, California, Australia, Switzerland, France, Italy, Germany and Bangladesh on an international footing and Glastonbury, Shepton Mallet, Kingsbridge, Frome, Wellington, Winchester and Brighton more locally, to name a few have very real concerns over 5G being rolled out without better evidence as to its safety.

Summary of Glastonbury Town Council (GTC)
A digital library of evidence – containing 57 documents – was collected and curated by members of the committee to demonstrate the safety or otherwise of 5G cellular network technology.

10 presentations were given from Universities, Telecom companies, learned folk and individuals from around the world. 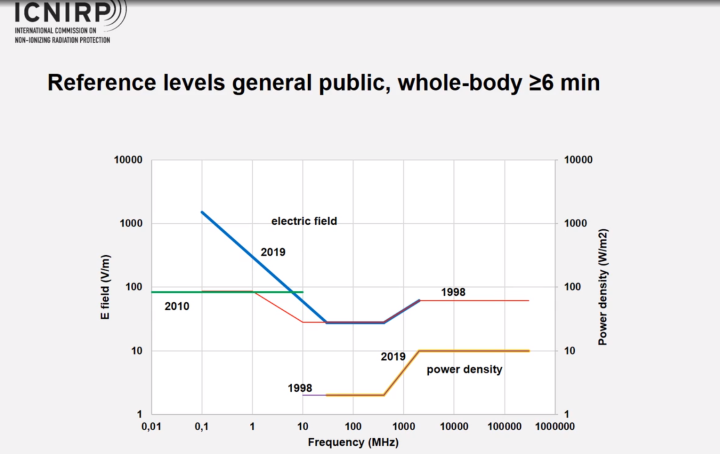 GTC debated the International Commission on Non-Ionizing Radiation Protection (ICNIRP) guidelines re thermal effects on the body. They are the Govs “go to” advisory body for EMF and talk of a potential for a 1 degree rise in body temperature, whatever that means but I don’t think it’s great. (I did ask a Cllr who says they have some knowledge to advise what a 1 degree rise meant but they chose to skirt around it in their response for some reason.)

GTC touched on the Non thermal effects around “EMP activation of voltage-gated calcium channels” . Professor Butler proposed to the committee that there was a potential for the nonthermal effects of radiofrequency radiation to “over stimulate an influx of calcium ions into cells, creating free radicals.”
Professor Butler suggested that the resultant ‘oxidative stress’ caused by these free radicals could be an important factor in the progression of chronic conditions – such as “cancer, Alzheimer’s, and other neurodegenerative diseases.”

Their appeal states: “We, the undersigned scientists, recommend a moratorium on the roll-out of the fifth generation, 5G, for telecommunication until potential hazards for human health and the environment have been fully investigated by scientists independent from industry. 5G will substantially increase exposure to radiofrequency electromagnetic fields (RF-EMF) on top of the 2G, 3G, 4G, Wi-Fi, etc. for telecommunications already in place. RF-EMF has been proven to be harmful for humans and the environment.”

Glastonbury Town Council have adopted the Precautionary Principle
This council has a social responsibility to protect the public and environment from exposure to harm, albeit unpredictable in the current state of scientific knowledge, and therefore opposes the roll-out of 5G in the Parish of Glastonbury – based on the precautionary principle – until further information is revealed from a newly convened 5G Advisory Committee (working group).

Cllr. Jon Cousins, Deputy Mayor of Glastonbury, and Chair of the 5G Advisory Committee quoted as saying: “Prof. Butler’s assertion that 3,400 studies in Medline – the peer review library of journals – indicate quite strongly that radio frequency radiation is not only a carcinogen, but “a neurotoxin and has other deleterious effects on humankind”

Sounds like he has some credentials… perhaps we should listen?

Let’s take a look at history…

Occupational exposure to electromagnetic fields can lead to an increased risk of developing Alzheimer’s disease, USC researchers reported in a new study of more than 300 Southern California patients.

“Seamstresses seem to be among the individuals with the highest occupational EMF exposure,” said Sobel. “They sit near motors of sewing machines for hours, and most industrial sewing machines are always on, and always produce magnetic fields.”

BME 3x more likely to get early onset dementia
The Alzheimer’s Society report estimates that there are 11,392 people from Black and minority ethnic (BME) groups with dementia. It is noteworthy that 6.1% of all people with dementia among BME groups are early onset, compared with only 2.2% for the UK population as a whole, reflecting the younger age profile of BME communities.

Is this how we should be educating our kids? Or would a forest school be better for their overall well being?

Totally get remote operations by doctors… skills in a doctor can be used in another country!

Which of these are a joke, fake news, nothing to see here and which could have a very real impact on our residents? Don’t we need to ask questions and find out?

“5G offers many things that are attractive to people who love technology, such as time-saving automation, autonomous vehicles, ubiquitous smart homes, real time data-transfer, and the Internet of Things, to name but a few. But 5G also means increasing the number of cell towers in Germany from 90,000 to 750,000; launching approximately 12,000 5G satellites into space; increasing public exposure to microwave radiation from around 2.5 GHz currently to 200 GHz; seeing potential liability claims against owners of cell-tower locations; chopping down trees on a large scale (to ensure good transmission); as well as irradiating plants and animals. Above all, there is uncertainty about whether 5G can be considered safe in terms of public health. This is a very serious matter and, until such uncertainty is adequately clarified, the precautionary principle must be applied.”

A quick reminder of the constitution…
B 7.3 23. Ensure that the scrutiny process contributes to the promotion of community well-being and that public services are responsive to the needs of the people.

I encourage this panel to vote in favour of the setting up of a Task & Finishing Group to define it’s term of reference and look into this matter further and bring its findings in January 2021 to this panel for further discussion.

I would suggest the following way forward:

Well that’s what I would have said if yet again I hadn’t been shut down by the Conservatives looking to rule the roost.

I’m glad Cllr Sharpe committed to flesh out a whole bunch of items and bring them back to the panel in the future… I look forward to monitoring his progress and holding him to account in my role as Vice Chair.

As for the 5G debate, that is likely to be kicked into the long grass unless residents demand it… so make your feelings known to your local Councillor…

Anyway, looks like I’m Vice Chair for a while, until at least October’s Full Council meeting…

It was obviously a very emotional moment for Gurch at the end of the meeting when he chose to resign as Chair and scupper the Tory plan to call a “vote of no confidence” at the next council meeting… all those plans gone to waste!

Very distasteful responses on social media immediately after the meeting from Lead Members who keep harping on about respect… disgraceful behaviour by those who should be setting an example and I urge them to look in the mirror before pointing fingers and reflect as this is all visible on Youtube, Twitter & Facebook for residents to make their own minds up…

Thank you Gurch for being brave enough to stand up, break free and become your own man. You can now show your residents what a Councillor can do who is not under the whip of the Tory party. I’m always around if you need to chat something through as are all the Independents who respect and appreciate each others uniqueness and allow their energies to flow… even when we don’t agree, we support each others right to have our own unique thoughts!

Just imagine if the Tory Councillors spent as much time working for the benefit of residents as they do planning skulduggery against, admittedly, a very challenging opposition… perhaps then they would not have got RBWM in the quagmire we find ourselves in?

If you have read this far, gold star to you 😉